Well, top that, what a year!!!  Busy, busy, busy! There can never be another twelve months like this last one has been. I have not only taken in more sick, injured and orphaned hedgehogs this year than ever (500 in fact). It's been TV, radio,and journalists seemingly none stop.

The filming for Nature Nuts with Julian Clary was in fact done the year before, and I was sworn to secrecy. Then I found out that my dear friend Wildlife Kate, who was also part of the show, was telling folks so I did tell a few people and left the rest of you to guess.

It was a wonderful experience and to everyone's question "What is Julian really like?", he is really nice, gentlemanly and very courteous (OK Julian, you owe me for that last line!). That is apart from various little remarks and forever telling me that I stank. Give him his due, he did congratulate me on Twitter when I had that award, then spoilt it by adding; "Don't forget to have a wash before the ceremony."

It didn't seem long after that that I had the phone call from London asking if I would be prepared to go to the House of Lords to be presented with an award for Outstanding Achievements in Animal Welfare and Conservation given by the IFAW.  I didn't believe the lady who phoned me, Jo Hastie, (do you remember Jo?) and asked her what she was selling, then when she assured me that she wasn't selling anything, I was racking my brains to think which one of you lot where playing silly devils. When Jo convinced me that it was all true, I sank to my knees and cried, I'm filling up now.

The last message I got from Jo was to ask if I could manage all of this, I didn't understand what she meant, but I soon found out!!! It was just about every local newspaper wanted an interview, then it was ITV who were coming to film, on the same day BBC TV rang to ask if they could come and film, my head was spinning.  It is no good at all me even trying to describe my day at The Lords except to say, honestly, that it was the most wonderful day of my life.

But it wasn't over yet, far from it - starting the next day, I was asked to give live interviews with just about every radio station in the Midlands, and then there was a relaxed, peaceful silence on that front until I had an email from, can you believe, Las Vegas asking if I would give a live interview on the Rock Dog Radio Show. I was a little bit nervous but thought, "Well, it will only be for ten minutes at the most". Was it heck, it was for an hour, 6pm till 7pm. To cut a long story short, I really enjoyed it and found the interviewers Sam and hubby Jim very easy and fun to talk to. Listen to the full interview here.

Right, let's get our feet back on the ground shall we. I won't bore you with all of the events myself and Freddie were invited to and also, the demand for giving the talks has almost filled my diary up until this time next year, that is one talk per week, I won't do more than that as I simply don't have the time.

I must stress that these talks are mainly to educate people on the plight of the hedgehogs. I am being repeatedly told that I don't charge enough but my answer is always the same, just cover my driving expenses, that's all I ask. We are getting there, I know this from the dozens of folks who phone me and say, "I did as you said and picked the hedgehog up, and put it in a box with a hot water bottle because you say that hedgehogs should not be seen out in the day". I love to hear those words, it means I'm not talking to a brick wall, although, like lots of other carers I'm sure, I could pull my hair out at some of the unbelievable things the public do, or don't do, with sick hedgehogs, but then don't start me on that!

It's been a successful year in all, I have sent more hedgehogs than ever on their merry way with a prayer that they will make it through all the dangers that they face. I've made even more new friends and I thank them for that because I have so many nice people who rush to my aid when I scream for it. I just can't mention them all except to say thank you so much.

There are the friends who collect the sick hedgehogs from here, there and everywhere. These include the veterinary nurses who bring hogs to me from the various vets surgeries and they do this in their own time at their own cost, and the people who will take on hoglets to syringe feed when I have so many that I simply can't cope, the two champions that come to mind are Doris and Paul. Paul only joined us this year in 2015, and he has proved to be a natural with the hoglets. Then we have the numerous friends who foster hedgehogs for me. Just one of the many times when I have had my back against the wall and needed help, a certain young lady called Odette, a Worcester-based hedgehog carer, text me and said "I can take some off your hands" to which I asked "How many can you take?", "Twenty", I sent back "But how do I get them to you?" and this angel from heaven answered, "I will come and fetch them". Wow!!!! THAT is caring!!!!

My two Pit Bull's Annerley and Alex, stand guard over the Facebook page so anyone out there who wants to try their luck at trouble causing, you will have them to deal with. Diane is Deputy Sheriff so if one of them doesn't catch you, the other one will. Annerley also takes charge of the technical side and Twitter, she built this website you know. Diane deals with the fund raising along with hubby, Rob. Dear Carol answers any questions posted on the FB page as I rarely have time to check the page until sometimes midnight, then there are Charlotte and Leigh who help me with the Open Days. This years Open Day in September was the best attended so far - thank you to everyone who came along and supported WMHR -  I look forward to seeing you all again at our 2016 Open Day.

Lastly, and you all know who I'm going to mention, my wonderful vets. I can only sum this up in the fact that after the ceremony in London I gave a card to Craig, (top vet at Straitons Animal Hospital, Penkridge) which included the other vets in the practice and "the girls" (Craig's staff), and this card said that I owe the award entirely to them because without them I would never have been where I was that day. Sums it up.

Thank you SO much, may you all be there for me and our prickly friends in 2016 and a Happy and Trouble Free New Year. 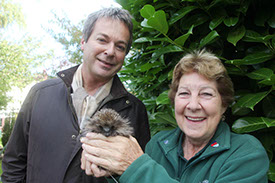 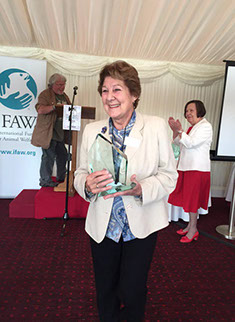 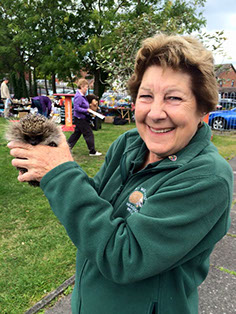