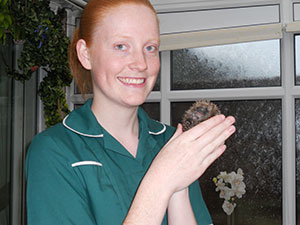 So far it has been a busy year, no more than usual I'd say, but it is definitely hotting up.

As usual, a couple of volunteers have dropped out. This apparently is the norm with all of the charities, folks rush in promising the earth then realise that they simply don't want the commitment any more.

Doesn't matter, I still not only have my veterinary nurse, Rachael, who has been a friend of mine for years and works at Carmel Vets, but we have yet another veterinary nurse who is offering her help, Vickie from Cavan Veterinary Centre

Another new helper, amongst many I'm glad to say, is Martin. Martin not only offers to go to the ends of the earth to collect hedgehogs, and has almost done just that - turned up out of the blue one evening because he said that I sounded low when he had phoned me in the morning!!!! (No, no, forget it, Martin has a partner). What a kind, thoughtful man.

Then an old friend of mine who used to be a carer, but gave up over 10 years ago, rang me to say, "How many babies are you hand feeding? Well I'm going to have them and take over because I've been there, done that, and I know the state you are in." This took a huge burden off me and it also allowed me to get a full nights sleep after baby feeding every 2 hours for what seemed like weeks.

Another friend Claire, who runs the Hogwarts Hedgehog Rescue took six off me a few weeks ago and hand reared them even though she had never done this before. Apparently her and her husband took turns doing shift work to feed the babies.

Margaret, who does a lot of work for loads of animal charities, seems to spend all of her evenings wearing her sewing machine out making things to sell on my open days. Not only that, she wraps literally hundreds of tombola and lucky dip prizes for us, she even pins the raffle numbers on them!!! Well done and many thanks Margaret.

Obviously there are many other kind people who help me enormously, but I simply do not have the room here, so thank you all anyway.

The year so far has been very exciting with invitations to various events. These events do take hours out of my day and so produce more work when I get home, but it does give me a welcome break, and I enjoy doing it. It also has its perks such as when I was asked to give a talk at Little Aston Golf Club. I was not only picked up and chauffeur driven there (and back) I was bought a drink AND treated to a waiter service four course meal. Nice work if you can get it!!!

Then there was the Ladies Circle where I was treated to freshly made scones with strawberry jam, fresh strawberries and clotted cream. I had just finished filling my face when the Chair Lady came around with another plate full of the same!!

Wildlife Kate was holding a sponsored walk to raise money for WMHR and invited myself and Cellie along to see them all set off. (AFTER all of the walkers had taken a turn at cuddling Cellie). So, thank you also Kate.

Then there was the "Hedgehogs &amp; Heroes" event, Cellie being the hedgehog (obviously). A really super event which was packed out, but I reckon the fact that all of the food and wine was free had something to do with it!  The big surprise came during the speeches at the end of the event, because all of the money that was collected that day was divided between the charities there, and Cellie and I received a cheque for well over a hundred pounds.

Then we had a packed weekend with Cellie and I helping two other charities. One was Tudor House, a residential home for the elderly. Then Cellie and I were invited to a prison (I'm not allowed to say the name) to raise money for a charity that helps the families of the prisoners who are held there. This was a real eye opener, but that is another story.

On Sunday I was invited to take Cellie to the Police Open Day at their headquarters in Stafford and to share a tent with our badger lady, Sandra, and also the Rural Police. We were also invited to share a gazebo with the cats protection charity Cats Whiskers at Pelsall Carnival on a beautiful summers day, packed out with people.

Last , well last so far this year, the Chief Inspector of the RSPCA took me to their animal hospital at Stapeley where I was introduced to the staff and shown around. All this with the intention of helping them, helping me, sort of thing. By the way, ITV will be coming to WMHR in the Autumn to do some filming, but I'm not letting on more at this stage..... its a secret!!!

Now you may say, "You wouldn't be so run off your feet if you didn't go gallivanting around such a lot" but this is how I make people aware of the plight of our hedgehogs. Whenever possible, I take Cellie with me, well its him that gets the invitations actually, and I believe this human friendly little hog has done more to bring the plight of our prickly friends to folk's attention than a lot of people realise, because if you think about it, you are more likely to take notice of the fact that hedgehogs are an endangered species, and that we should all try and help, if you have not only seen a real live one, but have even stroked one.

Until the next time...

<< Back to Latest News